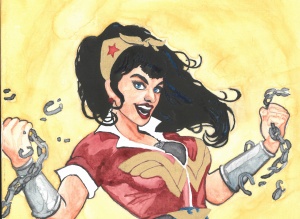 watercolor art by my daughter (based on this artwork)

Let me start by saying: I am not a feminist. I’ve never considered myself to be. The best essay I ever wrote in high school earned the worst grade I ever got on a writing assignment, because the topic was “When I grow up…” and I finished that sentence with an essay explaining why “…I want to be a stay-at-home mom.”

I am not a feminist, but I am a person who believes that:

“God created mankind in his own image,

in the image of God he created them;

male and female he created them.” -Genesis 1:27

Male and female, both created in God’s own image. Not greater and lesser, but equally in the image of  the Great I Am, the Creator of all. It does not say He created man in His own image and woman in an inferior mold, it doesn’t say He created women as a close second. It’s never been a stretch for me to believe that a God who is Himself both one and triune could create both men and women in His own image.

I believe that when we devalue women, when we give less credit to those human attributes that are considered feminine, when a woman has to act like a man in order to be valued or heard or considered strong, we are failing to give God credit for His creativity. We are failing to see the whole of who God is. He created us to work as a team, in the same unfathomable way He works as Father, Son and Spirit and yet as one.  When we fail to value both halves of the whole, we fail our whole selves.

So I went into the Wonder Woman movie with some apprehension, because I have not seen many examples of the media depicting a strong, powerful woman without belittling men, or leaving out the parts of a woman that make her half of the equation balance out the whole. Maybe I’ve not seen any examples. But my daughters love superheros, and they’ve been looking forward to this for a year. We bought tickets for the advance showing and we rounded up their friends and we went.

Do you know what? They got it right. And I left the movie with the realization that I’ve been hungry for this film, I’ve been starved to see this heroine on the big screen, the woman that is both powerful and compassionate. Unafraid to be the person she was created to be. Valued for being that person. I’ve been longing to see a hero I can identify with, without one sex or the other being reduced to a stereotyped caricature of what God intended us to be.

What I loved about this movie was that Wonder Woman wasn’t just a superhero who annihilated the enemy and saved the world. She was aghast at the way humanity behaved, she was righteously indignant over the insanity of war, she was heartbroken over the senseless deaths and suffering that war caused. When she saw injustice, she was unafraid to step in and make things right. The men in her life were heroes in their own right, they weren’t weak or petty or misogynistic. They weren’t intimidated by her, they protected her when she needed protecting yet they had no problem when the tables were turned. They relied on her to do what she could do, while asking her to let them do what they could do.

When I asked my daughters what they loved about the movie, they had this to say: Wonder Woman was respected for who she was, and she respected others for who they were. She cared deeply for everyone she met, not just those who played a main role in the movie. She was motivated by a love for peace and a desire to see an end to human suffering. She was comfortable being beautiful and strong and saw no reason why she shouldn’t be both. She respected the men she worked with and was respected by them. She broke the mold of the most feature films by showing that you can be deeply in love without the typical Hollywood one-night-stand. The fact that one moment she was distracted by admiring a baby didn’t take away from the fact that the next moment she was leveling a whole field of bad guys with grace and ease. She was as powerful as any of the superheros. And she believed that what will save the world is love.

Here’s what I loved about the movie: As I watched, I realized that I wasn’t just seeing a female superhero on the big screen for the first time. For me, I was seeing something else as well. (click to Tweet)

I was seeing Rahab, the forgotten harlot living on the very walls of Jericho, courageously protecting the Hebrew people and making it possible for them to enter the Promised Land…and through this, entering into the genealogy of Jesus.

I was seeing Deborah, God’s prophetess and judge, the warrior who in obedience to God led an army into battle and gave the victory to the Lord.

I was seeing Mary, who courageously said “yes” to God’s plan in the face of the wrath and judgement of society, whose body brought Heaven to Earth by her act of faith and submission.

I was seeing Katherina Luther, running Martin’s affairs so that the reformation could take root, sitting at the table with his friends and contributing to discussions whose echoes are still resounding the world over.

I was seeing Elizabeth Elliot, pouring her life into the tribe who killed her husband, showing them the grace and forgiveness of a God whose love is deeper than all the world’s sin and profound beyond all understanding.

I was seeing my friend, following God’s lead to start a ministry that brings the hope of God to forgotten people who are desperate to know they are worthy, valued and loved.

I was seeing my daughters, our daughters, unafraid to be the women God created them to be, unwilling to believe that a woman can’t be both strong and compassionate, gentle and powerful.